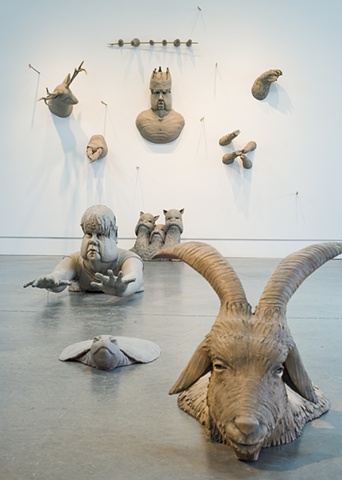 This piece expands on themes from a previous installation that dealt with inter-generational trauma, i.e., the unresolved affects of trauma that have been passed on from one generation to the next. I wanted to further explore the nature of trauma, this time specifically in relation to archetypes of heroism and the heroic’s relationship to violence.

Hercules is the unfortunate hero of my piece. The facts of the Hercules myth that I appropriate for my purposes are threefold: 1. Hercules killed his children in a fit of madness 2. As penance, Hercules performed twelve labors. 3. In Greco-Roman mythology Hercules was rewarded for the completion of his labors, with not only absolution, but with a place of honor on Mount Olympus. He was, and remains an archetype of the heroic.

In my rendering both Mount Olympus and the gods are absent from the narrative. Hercules is not rewarded for the completion of his tasks nor is he able to leave them behind and assume his home amongst the gods. Hercules remains in the shadow of his labors, burdened, pursued, and unable to disconnect from those he has vanquished. While being pursued, Hercules himself is in pursuit of his own children, who are out of his grasp and possibly moving into the afterlife.

Perched atop the children’s boat is a rooster; swimming beside Hercules is a ram and a turtle. These animals are symbols of Hermes/Mercury who traditionally ushered spirits into Hades. In my depiction ultimate destinations are uncertain. Equally, uncertain is the nature of the animals: are they the psychopomps of the underworld or might they simply be the sentient animals that they appear to be. The only certainty of my piece is Hercules, in pursuit of the objects of his violence and being pursued by them in turn. This circularity of these pursuits transforms the suffering of Hercules into a tragedy. The resolve of Hercules and the recognition that his pursuit is meaningful makes a persuasive case for heroism. It is a case for heroism that does not rest upon the success of brute force but upon the recognition of one’s responsibility in the world.